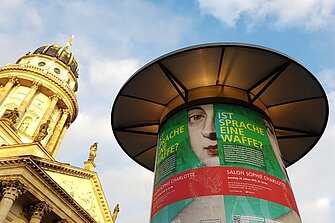 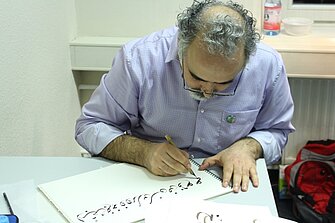 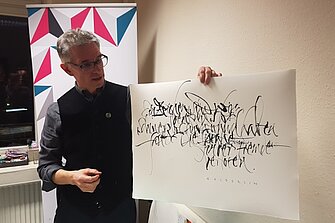 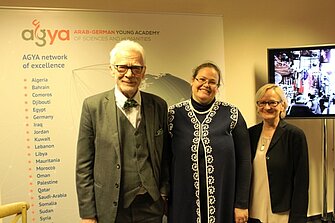 Can words really change the world? This year’s ‘Salon Sophie Charlotte' centred around the effects of language. The Arab-German Young Academy of Sciences and Humanities (AGYA) participated for the second time with an own program entitled ‘Sprachkunst & Kunstsprache’ (Language Art & Artificial Language) hosted by Professor Verena Lepper, AGYA Principal Investigator and curator at the Papyrus Collection of the Egyptian Museum Berlin. As an Arab-German Academy of Sciences and Humanities, AGYA considered the subject of language from an Arab-German perspective.

Professor Verena Lepper opened the evening with a talk on ‘The Art of Storytelling from a Transcultural Perspective’. She gave a first insight into the commonalities and fruitful exchange of Arab and German storytelling traditions. Storytelling is one of AGYAs cross-cutting topics in 2017/2018. In July 2017, AGYA members Prof. Dr. Bilal Orfali and Dr. Kirill Dmitriev got on a research journey to track the travel route of the life story of Gautama Buddha in Christian and Muslim tales of saints. The upcoming AGYA exhibition ‘Arab and German Tales: Transcending Cultures’, opening in April in Doha, will further explore the topic.
Following this introduction, the art of storytelling could be experienced in practice. The Palestinian-Jordanian storyteller Sally Shalabi (Shalabieh al-Hakawatieh, Amman) enchanted the audience with her vivid narration of the Jordanian tale ‘Abou Fool and the Ghul’. In times of special effects and computer technology Sally Shalabi captured her audience alone with her voice, posture and pauses, creating a more personal and intimate experience than film or audio book ever could.

How does language influence our perspective on social robots?

The role and potential of language in modern technology was subject of the following panel discussion. AGYA member Dr. Ahmed Hegazy (Medicine, Berlin) moderated the discussion on ‘Language and Artificial Intelligence’ between AGYA members Prof. Dr. Oliver Korn (Computer Sciences, Offenburg), Dr. Christian Fron (Historian, Heidelberg) and Prof. Dr. Dominik L. Michels (Computer Sciences and Mathematics, Thuwal, Saudi-Arabia). How does language influence our perspective on social robots? How far do we trust robots? Do we want them to fulfil tasks independently or do we prioritize having control over them? In the end, the panel agreed that although we are still far from robots thinking and behaving like humans, it is important to engage in an interdisciplinary debate on the ethical implications of this development before it becomes real and these questions become urgent.

The art of writing

To explore another medium of language, AGYA had invited two calligraphers to present their art. Calligraphic writing is more than just a tool to record language. Through form, rhythm and composition it expresses meaning beyond words. It acts as an image, a piece of visual art. The calligraphers, Abdul Razak Shaballout, a Syrian artist, and Torsten Kolle, a German artist, displayed their art in a calligraphy exhibition and a live performance. Mr. Shaballout illuminated history and forms of Arabic calligraphy before he demonstrated his craft by finalising one of his calligraphic paintings. Torsten Kolle, on his part, spoke about the western calligraphic tradition. Drawing several versions of a Hölderlin quote, he exemplified his techniques and tools. Not only did the two artists introduce AGYA’s guests to Arabic and Latin calligraphic writing, but they had used the common event for a vivid cross-cultural exchange among each other, even planning common future projects.

Language and Identity in the Arab World and Germany

The evening continued with a look into social and political implications of language. AGYA member Dr. Tamirace Fakhoury (Political Science, Byblos) held a talk about her research on ‘Language and Identity in the Arab World and Germany’. One case study that Tamirace Fakhoury focused on was Lebanon, where society is split along sectarian lines, and the multiplicity of languages in literature and public spheres has offered an alternative sphere for forging societal bonds and reflecting on the notion of multiple belongings and identities.

Storytelling in times of modern media

With a conversation between Prof. Verena Lepper and the Palestinian-Jordanian storyteller Sally Shalabi (Shalabieh al-Hakawatieh, Amman) the AGYA program returned to the subject of storytelling: After having discussed storytelling traditions earlier in the evening, Verena Lepper and Sally Shalabi now reflected on storytelling in times of modern media. The conversation, in which the audience was also invited to ask their questions, started with the question how Sally Shalabi uses modern media as a complementary element to her storytelling and went on to social and political aspects of stories and how Shalabieh al-Hakawatieh makes old stories relevant and suitable for today’s audiences and values. The evening concluded with Sally Shalabi telling the story of ‘The Horse’s Head’ that the audience had chosen as their ‘Wunschgeschichte zur Guten Nacht’ from a pre-selection of three stories (Both storytelling performances were filmed and are accessible on the AGYA Facebook Page).

20 January 2018
The Berlin-Brandenburg Academy of Sciences and Humanities (BBAW), at the Gendarmenmarkt, 10117 Berlin, Germany