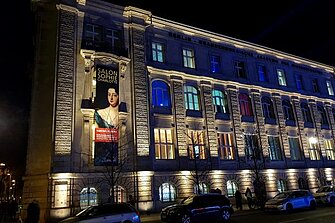 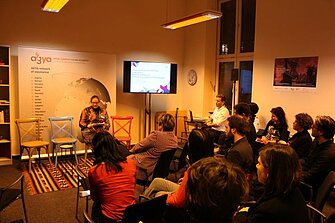 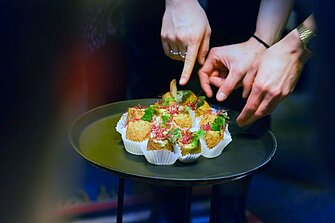 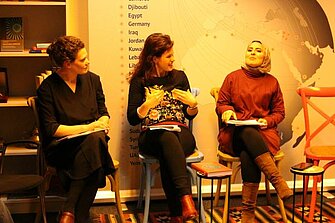 The theme of the Salon Sophie Charlotte ‘Weltbilder’, the German plural of ‘Worldview’, already suggests that the world no longer can be summarized in a closed singular concept. The need to acknowledge diversity and complexity is universal. Just as much as beauty lies in the eyes of the beholder, individual and collective concepts of the world, the self and the Other do. AGYA took the Salon’s theme as occasion to present a diverse range of Arab and German perspectives on scientific knowledge production, self-conceptions through cuisine and visual representations as well as poetic expressions of the future self. AGYA Principal Investigator and the evening’s host Prof. Dr. Verena Lepper guided through the programme. She summarized AGYA’s contribution to the Salon as an 'inspiring input that stimulates one’s eyes, ears, taste and brain; and provided insights into the work of AGYA as a vivid example of shared knowledge production'.

Manuela Bauche, in particular, addressed the question of the value of historical research for a critical engagement with knowledge production in the sciences. Through the example of Malaria, which is until today considered a tropical disease albeit historical evidence that the disease is by no means regionally confined to the tropics, she convincingly demonstrated the biased construction of knowledge and history, often leading to the perpetuation of power relationships built on false and ideologically tainted constructions of reality. Further questions addressed the relation between centers of knowledge production (theory building) and periphery (data collection) and the dynamics that shape such processes:

Knowledge production itself is a form of agency that needs more plural actors to participate in. Perspective matters! Our main task as scientists remains not only to critically question what we observe; but also to question our surrounding conditions of research production, funding, and mobility.

states AGYA alumna Hanan Badr. Amro Ali (AGYA member, Egypt) made a case especially for Arab scholar’s mobility: 'If we do not address the scourge of passport restrictions and visa regimes, the pace and orientation of holistic, transnational, and interdisciplinary knowledge production in the Arab world will continue to be skewed.'

AGYA member Philipp Blechinger connected the requirement of research mobility to the topic of climate change and strongly advocated rethinking not only what kind of knowledge is produced but also how it is produced. His suggestion of virtual conferences replacing physical meetings was discussed controversially as part of the panelists and the audience argued that face-to-face exchange could not be replaced by a virtual exchange. The inequalities between the participants, often preventing Arab scholars from participating in conferences because of visa issues, would still prevail, this time because of technical limitations not always allowing a sufficiently good internet connection to be able to participate in a virtual conference. Nevertheless, a significant reduction in the number of travels sided with virtual meetings was welcomed by both the participants and the audience.

AGYA Book Launch and Debate on ‘Self-Conceptions through Cuisine’

The panel discussion ‘Taste of Identity: Cuisine, Performance and Aesthetics’ with food scholar and blogger Anny Gaul (Arabic and Islamic Studies, USA) and Malakeh Jazmati (Chef and author, Berlin) was moderated by AGYA alumna Julia Hauser (History, Kassel). Together, they discussed self-conceptions through cuisine and how national identity, modernity and class can be felt through taste, ingredients and the receptivity for new influences. Anny Gaul, who is both a theoretician and a passionate cook, pointed out the fact that some recipes or ingredients made their way into national cuisines through women working in the households of foreign employers, preparing their dishes. The béchamel sauce thus made its way into the North African and Middle Eastern cuisine. Malakeh Jazmati referred to the Syrian cuisine as distinguished because of its well-balanced taste and broad and healthy variety. However, cuisine is closely tied to its immediate environment: In her new, Berlin home, she had to adapt some recipes to the local supply thereby deviating from the traditional recipe and changing the aesthetics of certain dishes, such as stuffed eggplants, a cornerstone of Middle Eastern cuisine. Instead of being stuffed, they are now cut into dices and cooked next to the rice and meat. This was necessary, says Jazmati, because of the huge size of the local eggplants, which are not suitable for the traditional way of preparing them.

The event was accompanied by the tasting of different Hummus recipes of the 14th century and from today's globalized fusion kitchen, temptingly presented by Malakeh Jazmati and her team. Find various kinds of Hummus recipes here.
The AGYA book launch of Insatiable Appetite: Food as Cultural Signifier in the Middle East and Beyond, edited by AGYA alumni Julia Hauser (History, Kassel), Bilal Orfali (Arabic and Islamic Studies, Beirut) and Kirill Dmitriev (Arabic Studies, St Andrews), published with Brill Publishers in 2019, complemented the culinary part with the scholarly.

Another highlight of the evening was the AGYA Photo Exhibition 'Re:Levant' and discussion with Nadine Al Koudsi, winner of the first price of the AGYA Photo Competition in the Levant region. With the winning pictures of the competition shown in Germany for the first time, the exhibition aimed at offering new perspectives on the Levant as a region, a social construct and a geographical location through photography. The central idea of the competition was to collect expressions of what is relevant in the societies of the region today.
The insightful discussion between Julia Hauser and Nadine Al Koudsi revealed the background story of her price-winning picture 'Nostalgia', featuring her grandmother´s deserted dining room in Damascus. Nadine Al Koudsi, who was previously living and working in the Gulf and now is based in Beirut, touchingly talked of the challenges and hardships of a life on hold, which many Syrians are facing today: The past is forever gone and the future is not yet there. Learn more about the AGYA Photo Exhibition 'Re:Levant'.

Poetry Slam 'Me, Myself and I in Future Worlds'

The evening culminated in the highly energetic and performative poetry slam 'Me, Myself and I in Future World', moderated by AGYA member Christian Junge (Arabic Studies, Marburg). The five slammers Furat Abdulle (Mainz), Jesko Habert (Berlin), Farah Al Wugayan (Kuwait), Temye Tesfu (Berlin), and Misheel Enkh-Amgalan (Berlin) each excelled in their very individual performances and was highly appreciated by the audience and followers of the AGYA Facebook page, where the slam was streamed live. The intensity of the applause revealed Farah Al Wugayan as the winner, closely followed by Temye Tesfu. The winning poet, who is a lawyer by profession, delivered a powerful and at the same time very poetic performance. Find the winning poem here.