A prominent feature of avant-garde music is to bend, play, and break with various rules of classical music culture to transcend established principles and challenge appreciation habits. Contemporary Arab music assembles many diverse styles. A dialogue with Western concepts has helped to establish a radically hybrid and global set of practices. At the same time, contemporary Arab music has defined itself through the expression of tonality beyond the typical Western scales, expanding conceptual approaches to musicology.

However, research focusing on the innovative intersection between Western classical and Arab traditional music is scarce. This project wants to fill this gap by initiating a dialogue between musicians, ethnomusicologists, linguists, and scholars of popular Arab culture and media. AGYA member Dr. Rami Chahin and Dr. Shahd Alshammari are providing a space to imagine, create, and discuss possibilities, outcomes, and future developments of these intercultural artistic encounters.

In a first step, musicians and composers have met to rehearse and record pieces of contemporary (Arab) music. In recorded conversations with Rami Chahin, the musicians reflect on compositional and improvisational techniques, performance styles, and linguistic concepts. How to realize modern singing techniques while using the traditional concept of microtonal harmonies? How to develop curricula of musical education across Arab countries and Europe? How to introduce new instruments to traditional forms of music?

Interview with artist and conductor Daniel Moreira: About the challenge of conducting a microtonal concert

I am not coming from an Arab country and this kind of tuning system is not natural to me. [...] I had to develop a dialogue with the musicians!

In the interview, musician and conductor, Daniel Moreira, emphazises the musical examination of microtonality and the unusual approach to tones used in the concert recordings. Harmonic effects did not play a role here, he explains, except to the extend that the method of playing brought the musicians and the tones they played into a dialogue with each other. For this purpose he formed subgroups of musicians, who sought to find their tones with each other. Listen to the whole interview below. 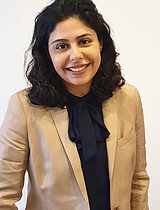 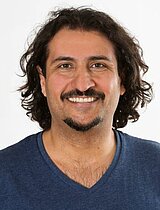 Listen to musician and conductor, Daniel Moreira, in exchange with AGYA member Rami Chahin. They discuss the challenges of a concert where harmonic effects did not play a huge role, but the musical examination of microtonality, which is part of Arab music culture (with German subtitles).