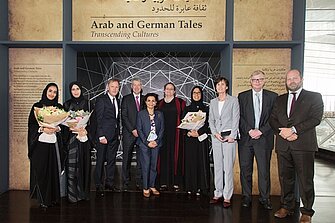 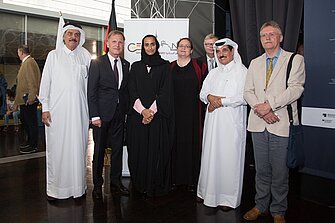 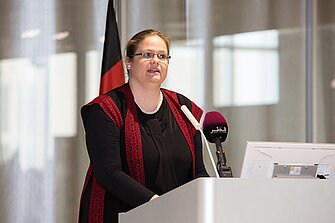 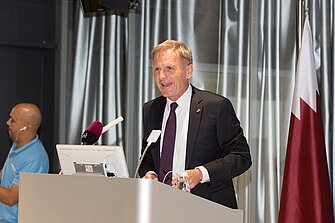 H.E. Sheikha Hind bint Hamad Al-Thani, the vice chairperson and CEO of Qatar Foundation for Education, Science and Community Development (QF) and chairperson of Qatar National Library's (QNL) board of trustees, opened together with H.E. Dr. Hamad Al-Kawari, Minister of State and vice-prime minister the  ‘Arab and German Tales - Transcending Cultures’ exhibition on 17 April 2018 in celebration of the official inauguration of the Qatar National Library, in the presence of a number of excellencies, ambassadors and distinguished guests.

The exhibition, which runs until 18 August 2018, is organized within the framework of the Qatar Germany Year of Culture. It provides an insight into the history of Arabic and German fairy and folk tales, and how the two cultures influenced each other.

It aims to show the transcultural value of narrative traditions as a shared cultural heritage, and highlights mutual influences, shared ideas, and cultural transfer between the Arab world and Germany through storytelling past and present.

‘This exhibition is an example of the important cultural exchanges that will take place at QNL. Sharing resources and collections across cultural organizations is crucial to mutual understanding, which is at the core of QNL's mission,’ said QNL Executive Director Dr. Sohair Wastawy.

For his part, H.E. Ambassador of the Federal Republic of Germany to the State of Qatar, Hans-Udo Muzel, hailed the exhibition as ‘extraordinary’ event that takes place as a ‘final contribution to the Qatar-Germany Year of Culture’, expressing delight that ‘it was possible to bring this stellar collection of old and modern manuscripts to Qatar.’

‘The new Qatar National Library is a magnificent building, serving as an outstanding venue for preserving Qatari and regional culture, as well as a center for science, information, and learning for the people of Qatar, Qatari citizens and residents alike. Presenting unique examples of Arab and German storytelling, once again the strength of our shared cultural traditions becomes visible’, H.E. the German ambassador said.

Meanwhile, Prof. Dr. Verena Lepper, AGYA Principal Investigator and curator of the exhibition as well as of Egyptian and Oriental Papyri  and Manuscripts at the Papyrus Collection in Berlin, said the exhibition is based on a joint research project combining both worlds. ‘The catalogue is published as one book in Arabic-German-English’.

‘Who knows that an elephant ran through the Carolingian city of Aachen as early as 802? It was brought from Baghdad to Karl the Great, the founder of Europe, as a diplomatic gift from Harun ar-Rashid, Caliph of the Arab Abbasid Empire. This was a century from which the oldest Arabic version of the One Thousand and One Nights dates; stories translated in Europe and later decisively influenced the Brothers Grimm in writing their fairy tales. These are just a few examples. This circle could hardly be more international’, Lepper added.

The exhibition will feature masterpieces from antiquity to the present including rare ancient Egyptian tales written on papyri such as the story of Sinuhe, dating from the XII dynasty (approximately 1,900 years BC). In addition, the exhibition will feature a cuneiform tablet with the Epic of Gilgamesh from the 13th century BC; stories of the Arabian Nights and the fairy tales of the Brothers Grimm; examinations of the famed One Thousand and One Nights through the Arabic oral tradition, before it was adapted and amended by European writers such as the Brothers Grimm; travelers between both worlds and their stories; the original Arabic handwriting of the famous German poet Johann Wolfgang von Goethe; and modern versions of such texts by Nobel laureate Naguib Mahfouz or the oral Qatari version of Cinderella.

The exhibition is a joint enterprise between QNL, the German embassy Doha, National Museums of Berlin's Egyptian Museum and Papyrus Collection, and the Arab-German Young Academy of Sciences and Humanities (AGYA).