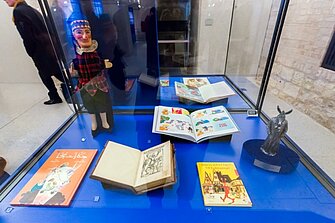 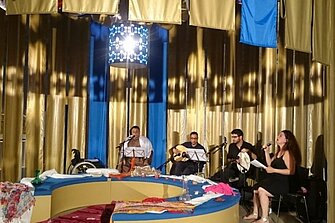 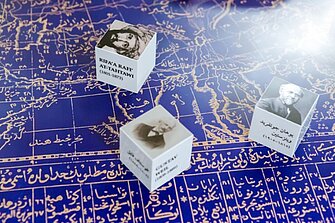 Tales and stories are central to the cultural heritage of mankind: through creative interactions between people in different places at different times, stories traverse generations. In so doing, they can connect the past with the present and link what lies in the distance with what is close at hand. Tales and stories can shape the identity and self-image of individual people and entire communities. The exhibition ‘Cinderella, Sindbad & Sinuhe: Arab-German Storytelling Traditions’ at the Neues Museum in Berlin explored how some of the best known tales from both Arab and German – and wider Western – cultures developed from common roots, splitting over the centuries to reflect the societies that adopted them. More than 300.000 people came to visit the exhibition in Berlin and to profit from the diverse accompanying program. ‘Storytelling is universal and can be regarded as inherent to human nature’, explains Prof. Dr. Verena Lepper, AGYA Principal Investigator and curator at the Egyptian Museum and Papyrus Collection Berlin. ‘With this exhibition we wanted to emphasize exchange processes, shared ideas, and the transfer of thoughts and concepts between the Arab world and Germany.’

With artifacts ranging from ancient Egyptian papyri to the stories of the Brothers Grimm and Arabian Nights, as well as modern pop-up books and comics, the trilingual exhibition (German/Arabic/English) highlighted mutual influences and shared motifs between Arab and German narrative traditions across 4,000 years. ‘I am incredibly happy to visit an exhibition in Germany that points to the long interweaving of cultural traditions between the Arab and world and Germany, rather than aiming at differences’, one of the Arab-speaking visitors showed his appreciation. Several showcases exhibited objects on common motifs in Arabic and German narrative traditions. For example, in both traditions a key theme is the question of how individuals can overcome societal hierarchies. Therefore it is of no surprise that ‘Cinderella’ is one of the most famous stories all over the world and has many variations and counterparts, as for instance the story ‘Layla and the Fairy Fish’ from the Arabian Peninsula.

Live-storytelling, lectures, vocal and musical elements on the Egyptian stories of ‘Isis & Osiris', an audio guide for children and adults, two exhibition objects to be touched as well as a wide range of workshops: The diverse accompanying program turned the exhibition in Berlin for young and old into an experience of the senses:

‘With the audio guide we wanted to generate a narrative in a culturally sensitive way that transports the visitor in the form of a young girl to modern Egypt, where she experiences many exciting adventures’, explains curator and researcher Dr. Sarah Wessel the underlying idea of the audio guide. ‘These adventures are based on the exhibited objects and lead from one showcase to the next. The audio guide took the children on a journey through space and time, which communicated the scientific content of the exhibition to children in a playful way.’

For the first time at the Neues Museum Berlin, guided tours were not only offered in German and English, but also in Arabic language. This allowed the museum to address a new Arabic-speaking audience.

The exhibition catalogue received a lot of attention

The trilingual accompanying catalogue published by the Kulturverlag Kadmos complemented the exhibition by offering a collection of essays by leading Arab, German and international scholars on the question of how knowledge and human imagination are transmitted over time and space. Professor Lepper sums up:

The exhibition catalogue received international attention not only from the general public but also in academic circles.

Vibrant Finissage of the Exhibition

The exhibition in Berlin was concluded with a vibrant finissage: Famous Egyptian musician Adham Elsaid and choreographer Nora Amin presented the Egyptian stories of ‘Isis & Osiris – Ayyoub & Naassa: Stories Travel Through Time’ in a live-performance accompanied by oud player Kareem Kandiel and percussionist Hakam Wahbi. The performance was based on a concept newly developed by author and actress Nora Amin as a fusion of the two stories, as an interweaving of the ancient and modern Egyptian heritage of myths and tales. Adham Elsaid (from the famous Egyptian band Wust El Balad) re-invented the Egyptian tradition of musical storytelling in his own style and with his unique voice, creating a contemporary rendition of his musical heritage that transcended borders and verbal languages. The exhibition was a collaboration between the Ägyptisches Museum und Papyrussammlung Berlin, Stiftung Preußischer Kulturbesitz and AGYA.