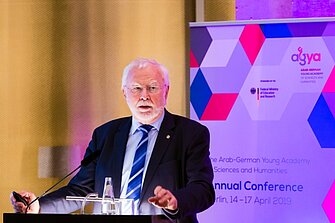 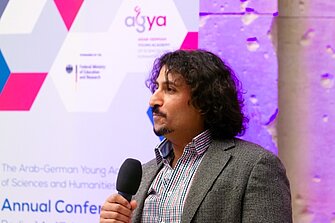 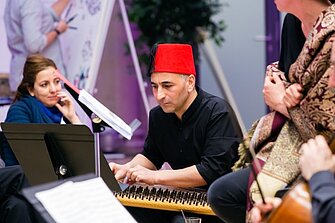 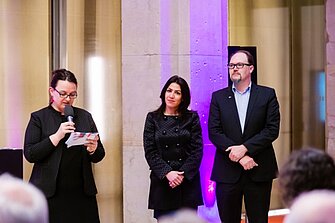 The massive amount of data produced and used in our daily lives today is unparalleled in human history. Daily headlines tout recent advances in data science and artificial intelligence as heralding the advent of a new social and scientific revolution thousands of times more powerful than the industrial revolution. Yet, 90% of such claims are just hype, cautioned Martin Grötschel to a packed hall of interdisciplinary scholars and interested guests on 16 April in an engaging keynote address on ‘Data Science and Artificial Intelligence’ within the framework of the 2019 Annual Conference of the Arab-German Young Academy of Sciences and Humanities (AGYA). Hosted at the Berlin-Brandenburg Academy of Sciences and Humanities (BBAW) in Berlin’s historical Gendarmenmarkt, Grötschel, President of BBAW, Co-Chair of the AGYA Advisory Board and a renowned mathematician and expert in combinatorial optimization, offered a critical perspective on the long-established academic discipline of artificial intelligence. Cutting through the current hype around big data and AI, he discussed what industry, academia and society can reasonably expect from data science in the near future.

Breaking through buzzwords and industry jargon, Grötschel simply cited Wikipedia’s plain definition of data science: ‘a multi-disciplinary field that uses scientific methods, processes, algorithms and systems to extract knowledge and insights from structured and unstructured data.’ Though he warned that the definition is always evolving, he suggested that ‘data science’ can best be conceptualized as existing at the intersection of multiple disciplines: computer science, mathematics (including statistics) and specialized knowledge domains. Its methods range from traditional research to software development and machine learning. Frequently glossed over in all the hype over big data, he noted, is the importance of domain knowledge. ‘Without existing knowledge in fields like medicine, biology or economics’, he warned, ‘there can be no data science’. Validating the importance of AGYA’s mission to foster interdisciplinary research cooperation, he contended that data science requires effective collaboration across disciplines to extract valuable results.

Grötschel readily admitted the great potential of machine learning and AI to advance science and society, but he emphasized the need to more realistically calibrate our expectations of what it can achieve. In terms of data, he cautioned, the vast quantities we currently generate is worthless without ensuring high levels of data quality. In short, he stressed, ‘if we put garbage in, we’ll get garbage out’. Similarly, he noted that while machine learning and AI have made massive strides in solving correlation-based problems, they are still no match for human creativity in theorizing causation. Today’s most advanced AI systems, he underscored, have yet to come close to being able to derive a causal theory akin to Kepler’s on planetary motion from the same set of data set. Thus, rather than inflating expectations, he concluded, we should recognize the domains and types of problems for which AI and machine learning are best suited and ultimately ‘work to ensure that data science and artificial intelligence serve us, the humans.’

Each year, AGYA members pick one particular topic at the interface of science and society around which to organize a public event as part of the Academy’s Annual Conference. As mentioned in the event’s opening remarks by AGYA Co-Presidents Dr. Zeina Hobaika and Dr. Jan Friesen, it was AGYA members themselves who requested the night’s theme and singled out Grötschel as an ideal candidate for sharing critical reflections on the current state of ‘Data Science and Artificial Intelligence.’ Many of the pressing issues discussed at the event tie into ongoing, interdisciplinary AGYA projects, such as those on FabLabs, smart cities and social robots, to name a few. While diverse in scope, all of these projects emphasize the relevance of intelligent technologies for science and society and directly engage the diverse range of societal expectations and fears regarding the effects of today’s digital revolution.

In true AGYA style, an interdisciplinary event format enriched Grötschel’s discussion on data science with musical contributions by AGYA member Dr. Rami Chahin, a musicologist at the Carl von Ossietzky University of Oldenburg. Chahin’s spectral microtonal compositions are based on modifications of tonal colors through which he not only combines math and aesthetics, but also Arabic and Western sound concepts. Bookending Grötschel’s keynote, musicians regaled the audience with an experimental rendition of the classic Arabic tale of Antarah, interweaving Arab musical influences into the form of a classic European operetta. Four shorter pieces following the talk included one entitled ‘Sudoku’, in which Chahin tested a rather playful mathematical approach of using musical notes as data. Grötschel’s talk and Chahin’s compositions, seamlessly tied together by Maren Lesche’s adept moderation, provided for an engaging evening of discussion and debate on a pressing issue for society that demands innovative, interdisciplinary and cross-cultural solutions.