The 'Entrepreneurship and Innovation Challenges in the 21st Century Forum' 2017 was an opportunity for Arab students to socialise and compete with their peers from other universities, engage with researchers and enhance their knowledge in the areas of their interest. It promoted bright Arab minds that excel in their field.

In late November 2017, the American University of Ras AL Khaimah (AURAK) in association with the Arab German Young Academy of Sciences and Humanities (AGYA) and the Arab Council for Training Students of Arab Universities (ACTSAU), organized the Entrepreneurship and Innovation Challenges in the 21st Century Forum. AGYA member Ahmad Sakhrieh, Chair of AURAK Department of Mechanical and Industrial Engineering, organized the event together with AGYA member Laila Prager and led the competition proceedings in Ras Al Khaimah. Core to the event was a competition for Arab student inventions in the fields of Energy and Environment; Information Systems and Programming; Social Media Effects on Individuals as well as Artistic Creation. This was a great opportunity for students to measure their skills against their peers from other universities, acquire valuable experience and compete for prizes, while at the same time engage with researchers, socialize with peers, and enhance their knowledge. On the organizers’ side, the competition aimed at identifying bright Arab minds from a variety of areas.

Students and supervisors represented 20 universities from seven countries (Egypt, Iraq, Jordan, Oman, Palestine, United Arab Emirates and Yemen). Following a thorough review of their applications, 35 students were selected to participate in the final competition at AURAK.

During the two-day event, all students had a chance to present their projects to a jury of experts, representing different areas of expertise.

In the Artistic Creation team, students presented works in traditional crafts such as jewellery, embroidery, leather works, pottery but also political cartoons. The Social Media group had several presentations on the positive and negative effects of social media on the individual and society, internet addiction and other multimedia-based issues. The Information Systems group sought to provide IT-based studies and solutions to regional challenges, such as an app-based Arabic dictionary for ASL sign language, an online library for a wide spectrum of the history and traditions of Palestine, or an online disease ontology in Arabic. The Energy and Environment group discussed innovative ideas of energy production and natural conservation through renewable energy sources. Local students from the mechanical and industrial engineering department, for example, presented their project titled 'Design and Build of the AURAK Solar Car'.
In each field, a first, second and third place was chosen.
All winners were honoured in a ceremonial event – the first places of the thematic groups were the following: 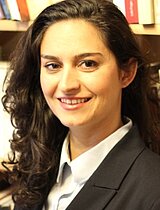 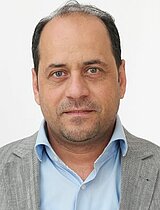