In an effort to enhance the absorption and fluorescence of flavylium in the red spectral region, we synthesized a 2′-hydroxyflavylium derivative (FLV-OH) with a rigid electron donating julolidine group attached to position 7 and examined its ground and excited states spectroscopy by absorption, fluorescence, ultrafast dynamics, and by density functional theory (DFT). The precursor compound without the hydroxyl group (FLV) was also synthesized and characterized in order to clarify the role of the intramolecular hydrogen bond on the spectroscopy of FLV-OH. The absorption and fluorescence spectra of both compounds indicate the stability of the flavylium ion in methanol and in aqueous acidic and neutral solutions. The S1 ← S0 absorption peaks at 540 nm and extends to 620 nm, whereas the corresponding fluorescence has two peaks and extends to 900 nm. The ability of the flavylium moiety to undergo ring opening to form chalcone is observed in basic solution. The presence of the hydroxyl group in FLV-OH promotes the formation of a quinonoidal base which was not possible in FLV. DFT and time-dependent (TD)-DFT calculations point to the existence of only one species within the lowest energy band in the absorption and fluorescence spectra. Femtosecond fluorescence upconversion and transient absorption measurements reveal the solvation dynamics within the initial 1–2 ps after photoexcitation, followed by molecular relaxation to the ground state. The latter was measured to be 505 ps in FLV-OH and 164 ps in FLV. The longer lifetime of FLV-OH in the excited state is correlated to the presence of a hydrogen bond (OH⋯O) that tends to stabilize the excited molecule. This H-bond was estimated from TD-DFT to be 1.83 Å in the S1 state which is shorter than that in S0 (1.91 Å). The stability of the excited state of FLV-OH was also reflected in the measured fluorescence quantum yield of 0.038, compared to 0.016 for FLV, in addition to its large molar absorptivity (ε540 = 52,500 M−1 cm−1 for FLV-OH vs 12,500 M−1 cm−1 for FLV). The current results indicate that FLV-OH has spectroscopic properties that make it suitable for many applications such as a potential light harvesting dye in solar cells. 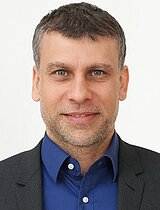