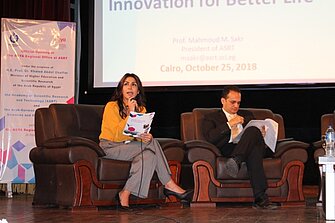 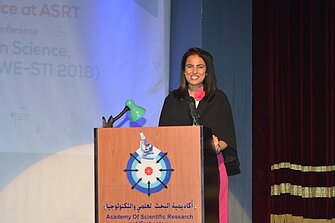 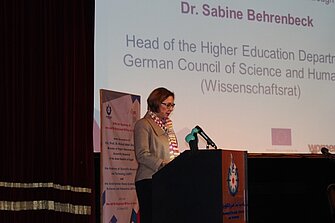 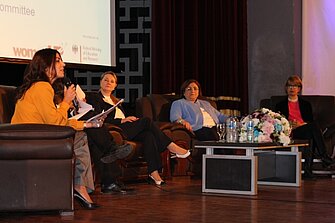 On 25 October 2018, the Arab-Germany Young Academy (AGYA) celebrated the official opening of its new Regional Office located within the Egyptian Academy of Scientific Research and Technology (ASRT) in Cairo. To mark the special occasion, AGYA and ASRT co-hosted an international conference on Women’s Empowerment in Science, Technology and Innovation (WE-STI 2018), bringing together scholars, decision-makers and key societal stakeholders from Egypt, Germany and Kuwait to exchange lessons and strategies for boosting women’s presence and leadership in STEM fields. As AGYA Principal Investigator Verena Lepper noted, the conference offered ‘a unique opportunity to learn from each other’s experiences,’ in a pioneering North–South–South exchange in which ‘speakers from Egypt, Kuwait and Germany explored and promoted best practices of women’s empowerment in science and technology’. Egyptian MP Prof. Dr. Marianne Azer and Dr. Sabine Behrenbeck, Head of the Higher Education Department at the German Council of Science and Humanities opened the conference with lively keynote speeches comparing German and Egyptian perspectives on empowering women through science.

Egyptian Women in Science – Why, Why Not, and What to Do?

MP Prof. Dr. Marianne Azer reviewed a vast range of statistics in different fields, showing that despite high rates of enrollment for Egyptian women and girls in STEM disciplines, 41% of qualified Egyptian women quit their STEM-related career tracks, as compared to only 17% of men. To overcome the many obstacles facing Egyptian women, Azer suggests that the government, society and women themselves should focus on empowering women through building and reinforcing self-confidence; strengthening branding and presence; emphasizing the importance of strategic networking; and developing strong relationships with women mentors to foster success.

Germany Shows That an Economy Can Be Inspired and Fuelled by the Know-how and Capability of its Citizens, Both Men and Women

Dr. Sabine Behrenbeck shared the story of her own personal career trajectory in Germany as a means to demonstrate a number of successful measures adopted in Germany to empower women in the STEM fields, while also recognizing that there still remains much left to improve. Although the number of women among PhD graduates from German institutions has researched 44,7%, for instance, only 24,1% of professors are female. From Germany’s experiences, she noted, ‘It is not single heroes or heroines that make the difference; it takes a relevant proportion of well-educated and highly qualified women, a critical mass’. She suggested that ‘to take advantage of women’s talents and motivation, political measures must be taken, as the Egyptian national strategy to empower women intends. It needs permanent support and insistent political will. And it needs women with the courage to be the first ones in their family, having few role models for their careers, but daring to chart the path. For these women, it is important to have networks to share experiences and to find mentors who notice their capability more than their gender’.

Visions of Empowerment: Best Practices and Innovative Strategies in the Arab World and Germany

AGYA member and member of the AGYA Steering Committee Prof. Dr. Zeina Hobaika (Lebanon) opened the panel discussion between four key stakeholders and decision-makers from Egypt, Germany and Kuwait by asserting that ‘Since the beginning, women have been at the forefront in many scientific fields, especially the life sciences and health sciences, but for most of them, their contributions were never acknowledged’. To kick off the discussion on how to identify, encourage and support women scientists, Hobaika asked President of ASRT in Egypt Prof. Dr. Mohammed Sakr to share information from a promising initiative to empower women in Egypt – ASRT’s WomenUP programme.

As a collaboration between ASRT and the EU, Sakr described how WomenUp seeks to enhance the social impact of research by providing comprehensive capacity building for women in five geographical regions of Egypt in leadership training, mentorship and technical support. For Sakr, ‘the alarming indicators shared in the keynote address reflect very clearly that, although the Egyptian women are highly qualified and widely enrolled in higher education in STEM fields, their achievements are not properly reflected in measurements of employment and reward’. He reiterated ASRT and the Government of Egypt’s resolve to create an enabling environment for women researchers by encouraging change in cultural and societal norms, and of course, in providing support to advance women’s excellence.

Spurred by incisive questions from Hobaika, the first speaker in the panel discussion, Prof. Dr. Mohammed El Shennawy, Advisor to the Egyptian Minister of Higher Education and Scientific Research, shared statistics highlighting varying degrees of discrepancies between female and male enrolment in fields such as engineering, agriculture, health, pharmacy, nursing, physical therapy, dentistry, medicine, engineering and computer science. ‘We want Egyptian women to have twenty-first century skills,’ he asserted, ‘including creativity, communication, collaboration and critical thinking. We have to show them ways to get scholarships and funding if they have ideas, how to take these ideas to the market, and encourage women to start small businesses and start-ups’. Among the measures the Egyptian Ministry intends to boost women’s representation in different sectors, he noted, include countering stereotypes about female empowerment in certain jobs, funding women to pursue undergraduate and graduate studies, especially in the STEM sector, reaching out to girls in rural areas of Egypt, and supporting legal measures to ensure the lack of gender discrimination in funding competitions.

Bringing the Kuwaiti perspective on women’s empowerment, Dr. Lobna Okashah, the Program Manager at the Innovation and Enterprise Support Director at the Kuwait Foundation for the Advancement of Sciences (KFAS) noted that, although Kuwait has a smaller population than Egypt, its percentage of women in scientific fields is indeed higher. She attributed Kuwaiti women’s success to their strong drive and ‘Just do it!’ attitude, citing historical circumstances that have long required Kuwaiti women to step into leadership roles, whether in the family or society at large. However, similar to many other Arab countries, she noted, women in Kuwait still face stereotyping based on cultural norms. She encouraged every society, whether in the Arab world or Germany, to focus on encouraging girls towards science from a young age, not just by letting them play with robots and chemistry sets, but also through concrete initiatives to complement educational curriculums to offer additional creative opportunities for female students in STEM fields.

From the German perspective, Dr. Nicole Elleuche, Administrative Director of the European X-Ray Free-Electron Laser Facility (XFEL) expressed the need in Germany to discover the causes and close the gap between the nearly 50% of high school girls reported in national surveys as being capable and motivated to pursue careers in STEM fields, and the much lower rate of only 17% of women among all of those in Germany who hold tertiary degrees in a STEM discipline, and only 4-7% of women in STEM leadership positions. ‘In Germany, we have to start somewhere earlier, in the school when they are still motivated and engaged, to reinforce and enable their motivation to pursue a STEM degree’ she said. As concrete measures, she recommended developing context-specific measurement tools and focusing on improving the ‘environment and the conditions under which women work within STEM disciplines in companies and universities’. Moreover, she noted, strategies must adapt to account for the fact that management and researchers often speak and operate in two different languages, which must be bridged in innovative ways in order to work together effectively. Women should not attempt to adapt by behaving like men, she said, but should ‘remain authentic to ourselves. We have enough power to be convincing and show that, of course, we like to take decisions and can take over leadership positions’.

Offering a unique perspective as an Egyptian scientist and business woman who has spent the majority of her career in the United States, Prof. Dr. Salwa Elgebaly encouraged women to take action for themselves, to talk to each other, form their own networks, and initiate teamwork structures from the very beginning. She also suggested structural measures that could benefit women, such as universities or government initiatives to help women translate their scientific achievements into profitable business ideas through capacity building and networking, particularly by integrating retirees into networking and mentorship programmes, to tap into their wealth of experiences and advice. Overall, her three take-home suggestions for women in the audience were: (1) aim high and be persistent, as achieving success is a long process; (2) work very hard towards a concrete goal; and (3) focus on approach through the environment around you. ‘Nobody will empower us,’ she said, ‘we have to empower ourselves’.

After the panel discussion, a final roundtable event wrapped up the conference. It reinforced the importance of North–South–South cooperation and ways to better integrate scholarship in the humanities and social sciences in discussions on women’s empowerment in the Arab region, which currently focuses largely on STEM fields and start-ups. Due to the success of the day’s rich exchange, plans were already discussed for organizing another WE-STI conference in 2019.