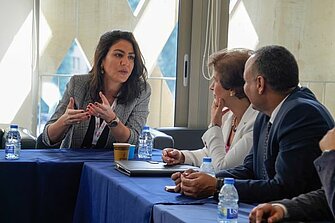 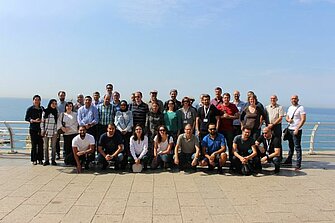 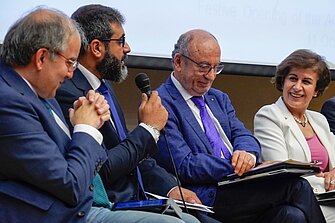 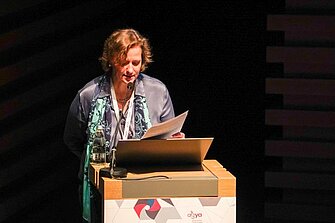 Long recognized as a parallel form of diplomacy, cross-border scientific collaboration can build valuable bridges between cultures by cultivating long-lasting relationships and establishing trust. Indeed, scientific partnerships often play a key role in keeping channels open and dialogue flowing. In its role as a platform for connecting excellent early-career scholars from the Arab world and Germany for interdisciplinary research cooperation, AGYA makes a significant contribution to North-South-South science diplomacy between Germany and all 22 Arab states.

For AGYA members, the Academy serves as a platform for research exchange that exposes them to new places, experiences and ideas, while often building lasting personal and institutional relationships grounded in mutual trust. In getting to know and interact with peers from different countries and disciplines, AGYA alumnus and mathematician Ahmad El-Guindy (Cairo University) notes, ‘we learn a lot about how similar and how different we are as researchers. Some aspects of our scientific cultures are exactly the same, while others are extremely different. In the Academy, we learn and we grow together’.
In terms of serving as a role a model for science diplomacy, El-Guindy continues: ‘It's all about attitude. When we witness the differences that are present, we seek constructive ways to deal with them’. As members of AGYA, he says, ‘we have the support to visit places, to meet people and to spread ideas that are much greater than any one person could do by themselves, and in that sense, the Academy is much more than the sum of its parts’.

AGYA Annual Conferences take place twice a year, once in Germany and once in an Arab country, rotating locations annually. In addition to hosting core member activities like General Assemblies and Working Group meetings, the roving Annual Conferences also introduce members to different actors, institutions and locations in the host country’s academic, policy and cultural landscapes. ‘They provide a fantastic interface for AGYA members with a variety of academics across disciplines and career stages’, says El-Guindy. ‘The members get to interact with people and institutes with interesting journeys and stories, which is always an eye-opener in terms of the similarities of challenges and the diversity of solutions across fields and regions’. The most recent Annual Conference in Beirut, for instance, featured three public events at local universities and a museum that dealt with themes like higher education , entangled food cultures of the Arab world and Germany, and photography as a medium of communication. While these events gave members the opportunity to meet key players in the local scientific scene, cultural excursions also introduced to them to Lebanon’s physical and historical landscapes. For German AGYA member Christian Junge, AGYA exemplies how ‘transregional cooperation beyond Europe turns the “rest of the world” into “centers of our world”’.

The summer school ‘Towards Multi-Perspective Arabic Studies’ (Arabische Philologien im Blickwechsel / نحو دراسات عربية برؤى متعددة), collectively run by AGYA member Christian Junge (Philipps-Universität Marburg), alumna Barbara Winckler (Westfälische Wilhelms-Universität Münster) and alumnus Bilal Orfali (American University of Beirut), demonstrates yet another way in which AGYA contributes to science diplomacy. Aimed at junior PhD students and postdocs in the field of Arabic philology, literature and cultural studies from European and Arab universities, the summer school facilitates the systematic exchange of perspectives and experiences between scholars based in Europe and the Arab world by offering them the chance to present their research and discuss recent developments in their fields in a vibrant international context. Bilingual by design, it encourages them to actively practice the academic language (Arabic or English) in which they are less versed, thus fostering the use of academic Arabic in European research. ‘If we continue to only use European languages in the field of Arabic Studies in European universities, we limit the scope of our academic work since we speak only to “ourselves” instead of entering into a real dialogue and building common learning communities’, says Winckler. Each year, the summer school takes place in a different location, organized around a different theme. To date, four summer schools have been held in Berlin (2014), Beirut (2017). ‘Actively using academic Arabic is the only way to stop silencing the “other” and to decolonize Western knowledge production by engaging with Arabic knowledge on equal terms. It helps scholars change perspectives and facilitates research “with” the other, rather research “on” the other’, emphasizes Junge.