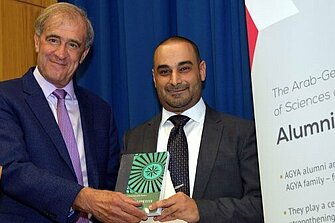 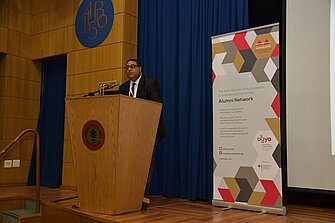 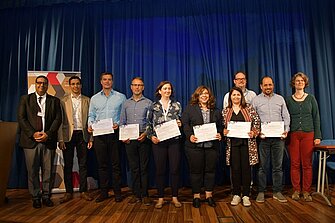 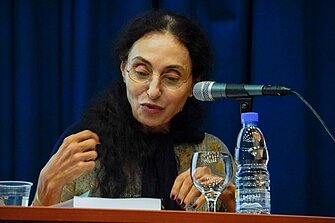 The book launch of ‘Insatiable Appetite: Food as Cultural Signifier in the Middle East and Beyond’ on 14 October at the American University of Beirut was the public closing event of AGYA´s Annual Conference in Beirut 2019. The volume is the result of a collaboration between AGYA alumni/alumnae Prof. Dr. Julia Hauser (University of Kassel, Germany), Prof. Dr. Bilal Orfali (American University of Beirut, Lebanon) and Dr. Kirill Dmitriev (University of St. Andrews, U.K.), and was published by Brill in fall 2019. The editors Julia Hauser and Bilal Orfali presented the freshly released book and discussed its contents with Nawal Nasrallah, book author and food blogger, and Prof. Dr. Rebecca Earle (University of Warwick, UK). In addition, Dr. Brigitte Caland (American University of Beirut, Lebanon) gave a keynote lecture on 'Hummus, the International Life of an Indigenous Dish', accompanied by a tasting of different hummus recipes.
In his welcome address, Prof. Dr. Mohamed Harajli, provost of the American University of Beirut, emphasized the 'transformative collaborations that can arise from partnerships such as fostered by AGYA that are intercontinental, transdisciplinary, and multicultural'. Furthermore, he accentuated on the importance of arts and humanities as part of the university curriculum, as they enable students to become better problem-solvers and communicators and finished his speech stating that the combination of humanities, technology, and purpose-based education promotes students with profound knowledge and diverse skills and provides lifelong learning.

Hummus, the International Life of an Indigenous Dish

In her lecture, Dr. Brigitte Caland led the audience through the history of hummus. The earliest mention of a hummus recipe goes back to the 13th century according to chronologist Ibn al-Adim from Aleppo in his book 'Winning the Beloved´s Heart with Delectable Dishes and Perfumes'. A century later followed the anonymous Egyptian cookbook ‘Kanz al-fawāʾid fī tanwīʿ al-mawāʾid’ (‘Treasure Trove of Benefits and Variety at the Table’, translated into English by Nawal Nasrallah), gathering several hummus recipes. Interestingly, the hummus dishes of that era were all greenish in color, due to the use of parsley and peppermint, and garnished with chickpeas, crushed rose buds, ground pistachio, mint, cinnamon or roasted hazelnut. A modernized version (ḥummuṣ mutabbal bi-l-zeyt) was introduced by the Lebanese Khalil Sarkis in 1885. While the basic ingredients stayed the same, the color changed to cream white and the topping was reduced to olive oil and minced parsley. Throughout history until today, the claim over hummus is contested and coined by rivalry over the original and best recipe. Globalization has led to the internationalization and commodification of the dish. Due to its nutritious qualities and its suitability for a healthy modern diet, it has gained a place of its own and can be found as a ready-to-go dish in the refrigerated sections of many supermarkets around the world today. Of course, nothing can replace the pleasure of doing it yourself and the rewarding unique taste.

While listening to the presentation, the audience had the chance to taste three different hummus dishes (plain, with avocado, and with beets) by Brigitte Caland and discover new facets of the world of hummus.

The recipes can be found in the AGYA Hummus Recipes Booklet that has been distributed on the occasion, also containing a 14th century recipe from the 'Treasure Trove of Benefits and Variety at the Table'.

The publication is the result of the conference 'Insatiable Appetite: Food as Cultural Signifier' held in Beirut, Lebanon in May 2016 by AGYA, the American University of Beirut and the Orient-Institut Beirut. ‘The idea for this kind of conference came up between Julia Hauser and me during an AGYA conference in Malta in 2015’, said Bilal Orfali in his introductory remarks.
The title 'Insatiable Appetite' hints both at an existential as well as an aesthetic dimension of food. It describes the imbalance between appetite - or rather hunger - and the need for more food supply as populations grow while resources diminish and are unequally distributed. However, the title also addresses the sensorial and aesthetic pleasures associated with food, which in its extremes sometimes lead to extravagance and even decadence. Food is a necessity and ideally a pleasure at the same time, although political and economic realities often lead to the deprivation even of the sheer minimum. Carole Counihan and Penny van Esterik´s remark ‘Food links body and soul, self and other, the personal and the political, the material and the symbolic’, as quoted in the volume´s introduction, gives an idea about the wide array of topics and disciplinary perspectives related to food.

Insight into the Book

The chapters of this volume investigate the cultural importance and scientific ramifications of food and foodways in the Mediterranean and Arab Muslim countries in particular, from late antiquity to the present. The book is divided into six sections and consists of fifteen individual contributions covering a wide spectrum of food related topics. The chapters in the section 'Food and Social Status' look at hospitality and generosity in the upper-class Damascene society in the Mamluk era on the one hand, and on the change in food and dining habits during the nineteenth century due to increasing contacts with the West. The second section 'Prohibitions and Prescriptions from Classical Islam to the Present' comprises three chapters dealing with the conflictual situation around garlic and onions as appreciated for their medical benefits and at the same time rejected because of their odor, the dos and don’ts of Syrian medieval cookery, and halal certification in contemporary South Africa. The two chapters in the third section 'Food, Gender, and the Body in the Late Nineteenth and Early Twentieth Centuries' explore the discursive connection between food and happiness in Egyptian novels and culinary literature, and the relation of food and body in Faris al-Shidyaq´s novel Al-Sāq ʿalā al-sāq. In the section 'Intoxication: Wine and Hashish in Literary Sources and Beyond', the symbolic meaning of wine in early Arabic love poetry, the literary representations of hashish in modern times, as well as the consumption of wine and pork in Reconquista Spain are explored. Section five 'Abstention: Vegetarianism in the Mediterranean and Europe from Antiquity to the Nineteenth Century', looks at traditions in Islam dealing with vegetarianism. The three chapters give insight into how writings on vegetarianism in ancient Greece were very much informed by perceptions of foodways in other parts of the world, how ethical reasons played an important role in the total rejection of animal products by one of the most important classical Arab poets: Abu l-Ala` al-Ma´arri, and why perceptions of foodways in the Middle East played an important role in debates on vegetarianism in nineteenth-century Germany. The last section 'Managing Scarcity in the Nineteenth and Twentieth Centuries', deals in its two chapters with the famine in Lebanon in World War I and the way people turned food into an object of fantasy and invented substitute foods, and with international food-aid programs in the Middle East from the interwar period until the 1960s as a result between actors on the ground and organizations.

In the framework of this public event hosted and organized by members of the AGYA Alumni Network, 24 new AGYA alumni/alumnae were inaugurated by the new AGYA Co-President Prof. Dr. Anis Ben Amor (Tunisia) and Steering Committee member Prof. Dr. Ahmed Hegazy (Germany). After five years full of creativity, visions and commitment, the new alumni/alumnae will continue their work on the expansion and consolidation of the AGYA network to enhance a sustainable intercultural, education and research environment for future generations of AGYA members.