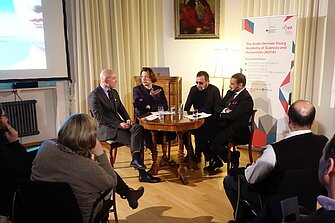 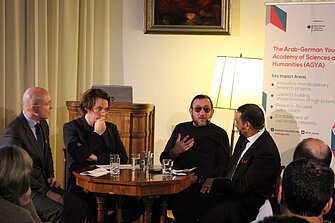 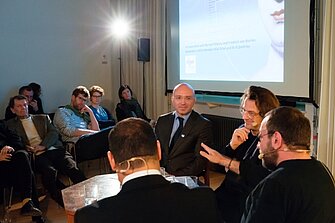 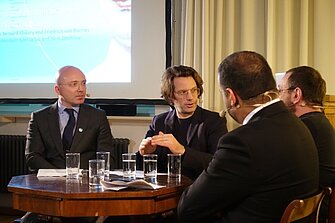 In the tradition of the urban salon culture of the 17th and 18th centuries, the Berlin-Brandenburg Academy of Sciences and Humanities (BBAW) annually opens its doors to the public for the Salon Sophie Charlotte, an evening of thematic discussions in a coffee house atmosphere. As part of this year’s event devoted to the theme of ‘Measure and Measuring’, AGYA alumni Dr. Kirill Dmitriev and Prof. Dr. Bilal Orfali, both Arabists, moderated a debate between prominent architects on contemporary trends in their field from German and Arab perspectives.

In several AGYA projects to date, both AGYA alumni Dmitriev and Orfali have collaboratively researched philological phenomena and the manifestation of linguistic encounters in cultural practices such as the narration of the life story of Buddha. Another AGYA projects took them to the Arab Gulf region, where they were puzzled by the architectonical developments, such as how architectural design seemed to strive for superlatives and monumental effects to the detriment of human scale (i.e. the set of human’s physical qualities considered in design and architecture). Thus, the relationship between human scale and architectural design inspired their contribution to the Salon Sophie Charlotte 2019 on ‘Measure and Measuring’. In the intimate atmosphere of the so-called ‘Aesthetic Salon’, they engaged the architects Bernard Khoury (Lebanon) and Prof. Dr. Friedrich von Borries (Germany) in a debate on their provocative viewpoints regarding ‘Aesthetics and the Human Scale in Contemporary Architecture in Germany and the Arab World’.

After earning degrees in architecture in the United States, Bernard Khoury, known today as the enfant terrible of the Lebanese architecture scene, began his career in the aftermath of the Lebanese civil war. The post-war economic and political reconstruction of Beirut, characterized by a strongly politicized and polarized society, influenced his architectural state of mind. With references to war and radical interaction with urban space, his buildings stand out as provocations. His German counterpart, Prof. Dr. Friedrich von Borries is a German architect and Professor for Design Theory at the University of Fine Arts Hamburg (HFBK), who sees his work as blurring the boundaries between urban planning, architecture, design and art. More specifically, his work focuses on the relationship between design practice and socio-political development in European cities.

Starting with an introduction on the centrality of human scale as a measure in contemporary architectural thinking, the discussion quickly picked up momentum as it shifted to addressing political aspects of architecture. While both speakers agreed that architecture can be considered a political act (quoting architect and artist Lebbeus Woods), they interpreted the meaning of ‘political architecture’ very differently based on their cultural and political contexts. On one side, working in the absence of a functioning state apparatus, Khoury has turned to the entertainment industry, making ‘architecture for the rich’, with the aim of manipulating the realities of Lebanon’s most prosperous social classes. He built, for instance, a nightclub in a symbolic location in a Beirut neighborhood that witnessed horrific atrocities during the civil war. The club itself is sunk into the ground like a grave. With this architectural statement, Khoury aimed to illuminate the almost forgotten urban scars of past political violence. On the other side, von Borries focused on the state as an important player in actively shaping the architecture of European cities. In particular, he saw the state as having an important role in the creation of social housing, where innovative design concepts can transform public space and shared residences to bring together different generations, cultures and social classes.

The audience thoroughly enjoyed the vibrant exchange between the architects, which was a welcome addition to the more scientifically-oriented discussions on ‘Measure and Measuring’ throughout the evening. ‘The discussion raised a lot of new questions’, summed up Orfali, ‘and definitely showed how the human scale in architecture can extend beyond physical qualities to include emotional, performative and political aspects of human life.’