Carbon nanomaterials (CNMs) such as graphene quantum dots (GQDs), graphene oxide nanosheets (GO), single and multiwalled carbon nanotubes (SWCNTs, MWCNTs) exhibit different drug loading capacities, release rates, and targeting abilities. This explains the reported discrepancy of their associated therapeutic efficiencies when used as drug carrier systems. In this study, for the first time, two different types of GQDs named GQDs1 and GQDs2 were synthesized, fully characterized, loaded with the chemotherapeutic Doxorubicin (DOX) and compared with other CNMs under the same conditions. The effects of shape (spheres, tubes and sheets), size (30–180 nm), and surface charge (−64.9 to −11.85 mv) of the synthesized CNMs on DOX loading and release efficiency as well as cytotoxicity against MCF-7 cells were investigated. Furthermore, the biosafety of the synthesized GQDs was studied both at the in vitro level using human WI-38 cells and at the in vivo level at low and high doses of 5 and 20 mg/Kg using healthy female Wister rats. Results revealed that GO nanosheets showed the highest DOX loading capacity reaching 2.85 mg/mg while GQDs1 exhibited the highest release rate of 78.1%. The in vitro cytotoxicity evaluation indicated that the smallest spherical nanomaterial among the tested CNMs, namely GQDs1 was the most efficient one on delivering DOX into the cells and inhibiting their proliferation. Regarding the biosafety, all CNMs displayed no noticeable cytotoxicity against WI-38, except for GQDs2. Moreover, hematological, biochemical and histological assessment of both kidneys and livers of treated rats assured the high biosafety level. We also present new insights on the first principle calculations investigating the adsorption of DOX on GO and GQDs. The calculations showed that DOX molecules adsorbed almost equally on both nanoforms, however, the flaky nature of our GO monolayers allowed for sandwich-like structures to exist making its loading capacity superior over GQDs. Based on this comprehensive study, GQDs is the most promising type of the tested CNMs to be used in further studies. 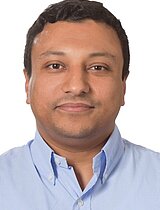